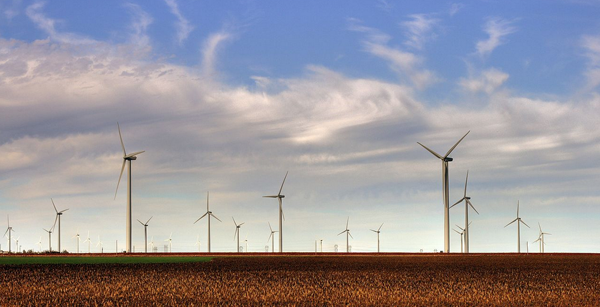 LAWRENCE — Renewable wind energy is experiencing a boom, with more wind turbines popping up across landscapes in the U.S. and abroad. Indeed, wind energy accounted for 3.3 percent of electricity generation in the United States in 2011, according to the U.S. Energy Information Administration. Globally, that number was 2.9 percent for the same year.

But as wind turbines proliferate, researchers at the University of Kansas are looking at how these forests of turbines affect the wind itself. What happens to the wind when a larger number of wind turbines removes more and more of the energy of atmospheric motion?

Atmospheric science professors Nate Brunsell and David Mechem in KU’s Department of Geography are co-authors of a new study just published in the Proceedings of the National Academy of Sciences by an international research group that evaluated the effects of large wind farms on atmospheric flow and its implications for how much renewable energy the turbines can generate.

“Wind turbines generate electricity by removing energy from the wind, so a larger number of wind turbines should result in a slowdown of the winds in the lower atmosphere,” Mechem said.

The researchers quantified this phenomenon in numerical simulations by applying a sophisticated model normally used for weather forecasting to one of the windiest regions of the United States.

The team found that a slowdown effect triggered by wind turbines is substantial for large wind farms and results in proportionally less renewable energy generated for each turbine versus the energy that would be generated from an isolated wind turbine.

While the researchers stress that no current or planned wind farm approaches the size or concentration that would cause the slowdown effect, their results suggest the phenomenon tied to large wind farms needs to be accounted for in future planning of wind energy.

“When just a few wind turbines are installed, each additional turbine results in a similar increase in electricity generated, as you might expect,” Brunsell said.

However, when a substantial number of turbines are installed over a small area, the amount of electricity generated is no longer governed by simple multiplication, according to the researchers.

“Instead, because the turbines extract energy from the wind, additional turbines will each generate less and less electricity,” Mechem said.

The team’s simulations estimate this slowdown effect results in a practical upper limit of 1 megawatt per square kilometer that can be generated — far less than previous estimates not accounting for the effect. Current wind farms are operating well below this generation limit, but the authors found that this slowdown effect needs to be accounted for, particularly when comparing different sources of renewable energy.

The study was published online in the scientific journal Proceedings of the National Academy of Sciences on Aug. 24.

Photo: The Smoky Hills Wind Farm as seen from Interstate 70 in Kansas. Credit: Drenaline, via WikiCommons.