LAWRENCE — After he finishes his work at the University of Kansas this year, senior Alex Murray will be headed to Ireland to pursue a graduate degree after receiving word on Saturday that he had won the George J. Mitchell Scholarship. 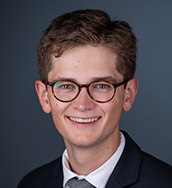 Murray, a senior who attended Olathe Northwest High School, has focused his studies and extracurricular activities around a central theme of sustainability and environmental issues while at KU. He is the second student from KU to earn the scholarship.

This year, 357 students from across the country applied for the award, with only 12 students earning scholarships. Five of those 12 came from Ivy League institutions.

"Alex's remarkable commitment to improving the world for future generations is invigorating. He is a wonderful example of the kinds of leaders we seek to create at KU, and we are proud to have a Jayhawk like Alex representing our university among this talented group of scholars,” said Chancellor Douglas A. Girod. “I offer my congratulations to him and to all at KU who have helped him achieve this well-deserved recognition."

“This scholarship is the reflection of all the investments that so many people put into me over the years,” Murray said. “I am so thankful to all them, including the faculty and staff members at KU who helped me out. I could not have done this without them.”

He encouraged other students to pursue similar scholarships, saying he never imagined himself being in this position when he started his KU career. Other students interested in applying for national scholarships may contact the KU Office of Fellowships by email at fellowships@ku.edu.

Murray said he became interested in sustainability issues from an early age and continued that interest through his high school years in speech and debate. At KU, he founded organizations like Net Impact KU, which promotes sustainability education among students and the local business community.

Through that program, Murray and other leaders were able to bring leaders in sustainable issues including the CEO of the Kansas City-based coffeemaker The Roasterie and the mayor of Greensburg, Kansas, a town that remade itself after a devastating tornado using green building practices.

“Growing up with agriculture playing such a significant role in my family, it brought to my attention these issues early on as something that can be an existential threat,” he said. “Later, at KU, sustainability really captured this idea that, whatever you’re doing, you can have an impact that’s so much bigger than your usual day-to-day activities.”

Murray also founded the KU Beekeeping Club, which recruited nearly 400 members in its first year of operation. For Murray, the club represented an opportunity to provide an outlet for students looking for a beneficial way to spend some spare time while also helping to educate the broader community on sustainable practices.

Beehives can be a “canary in the coal mine,” Murray said, providing an early warning for a whole host of environmental issues facing the community. Through the club, students engage with elementary schools and organizations like the Girl Scouts to help spread awareness of environmental impacts and issues.

After completing his studies in Ireland, Murray said he wanted to pursue a career that merges his business and environmental interests. One of the key challenges that those who pursue climate change issues know well is one of financing and investment, he said.

Given that, he said he wanted to pursue a career that uses his expertise in finance and in environmental studies. He imagined that could take him to a nonprofit like the World Resources Institute and eventually a policy role at the U.S. Environmental Protection Agency or at the United Nations.

He said the Mitchell Scholarship would provide a boost to those efforts, particularly the ability to study in Ireland, an island country that he said is taking bold steps to address climate change.